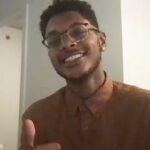 William “Nishal” Weems has always had a passion for history. And medicine. At Augustana College, he furthered these interests into a desire to become a psychiatrist. He looked at many colleges and universities before he visited Augustana. “What a difference,” he said. “When I went on my visit, the students they actually showed you attention as high school senior. They didn’t just blow you off. They integrate you within the Augustana culture.”

Now entering his senior year at Augustana, Weems, of Carpentersville, Illinois, says he has had a great experience at Rock Island campus and had “amazing” working relationships with professors in history, his major, and science topics such as biology and chemistry, his minors. A summer internship has cemented his interests in history and medicine.

“I’ve always been a history fanatic growing up,” he said. “I used to watch World War II documentaries, and the Cold War documentaries. I was really big into what shaped our country.” . But he always wanted to be a physician, too. History about psychology interested him, and so did a class he took about history of diseases.

Now he is focused on mental health for young people as a possible career. “A lot of our generation, focus on mental health because it’s now just becoming a problem that we’re looking at,” he said. “How can we prevent this, how can we comfort those who are in need of help? That’s where my mind .is always thinking.”

When Weems entered Augustana for the first time, he joined the mentorship program for incoming freshmen called PACE. From there, he joined ACI’s Peer Mentoring Program. His mentor, Jake Washington, would meet with him regularly. He said it opened his eyes and helped him appreciate his background as a biracial man, with parents who are African American and Indian. “We would have two weekly meetings to talk about my mental health or to talk about how my experience was going, and anything that was on my mind, Weems said. “Jake took me under his wing and our relationship grew.  Even to this day, he graduated two years ago, we still talk on a daily basis. It’s a partnership, and it’s a brotherhood, and it’s relationships that will never end because we all care, we all want to see each other succeed.” The ACI Peer Mentoring Program made a positive contribution to his college experience, and he says he is grateful to donors make it possible.

This summer, Weems is working at a hospital, collecting data for a research project on sleep. “I’m not at the University of Chicago at an internship at Mitchell Hospital without ACI,” he said. “It’s really an eye-opening experience. When you’re living everyday and you’re blessed, you don’t think about what could happen or what other people are going through. Being in this hospital setting, it really humbles you.”

When he’s not at Augustana, Weems lives with his family in Carpentersville. He has one sister, a college student studying to be a periodontist. Weems has led Augustana’s 365 Committee, which arranges student trips, co-chaired two committees for the Multicultural Programming Board, was public relations chair for the Student Government Association and worked with the Multicultural Men’s Association.